Apple has officially confirmed that it will hold an event on March 25th where it’s is expected to announce its long-rumored TV streaming and Apple News subscription services.

As usual, the invitation doesn’t have much to go by, but the animated countdown GIF and “It’s show time” tag seem to hint that the new TV service will play a big role. Rumors of an event at the end of March began last month, saying that the company will reportedly focus exclusively on services. Although, there is always a chance that we could see the anticipated announcements of revamped AirPods, a new entry-level iPad, and the long-delayed AirPower wireless charging pad.

This is not the first time that Apple has used this tagline for an event: the company first used it for a September 2006 event where it announced that it would start offering movies on iTunes, along with the first reveal of the iTV (which would be renamed Apple TV on release in 2007). It’s certainly a fitting teaser for the upcoming event. Just like in 2006, we could see Apple’s media offerings for its devices expand yet again. 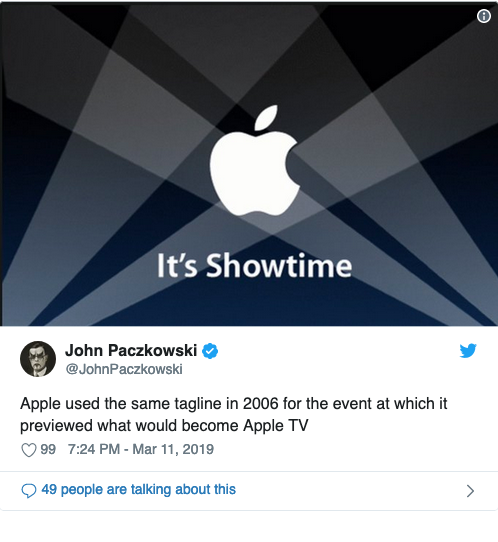 Along with the TV service, which is rumored to launch later this spring, Apple is also expected to take the wraps off its Apple News subscription service. The Apple News service will reportedly look to offer a Netflix-style bundle for magazines and subscription newspapers all in one convenient place. An early report from The Wall Street Journal indicated that Apple was having trouble with negotiations, reportedly demanding a staggering 50 percent of revenue from the service.